Goku Uniforms (, Goku Seifuku?), sometimes translated as Ultima Uniforms, are uniforms worn by high rank students at Honnōji Academy. Created by the Sewing Club, Goku Uniforms provide their wearer with incredible superhuman powers. The strength and abilities of a uniform varies by the percentage of Life Fibers it is made from, represented by the number of star-shaped markings emblazoned on them. Satsuki Kiryūin administers uniforms to students based on their skills and capabilities, which also determines their rank within the school hierarchy.

Goku Uniforms go from One-Star to Three-Star, with Five-Star uniforms being created for testing purposes by the Sewing Club. No-Star (, Muboshi?) students do not have the right to wear Goku Uniforms; they wear regular uniforms instead.

Goku Uniforms are extremely tough, but are not indestructible. Weapons such as the Scissor Blade and Tsumugu Kinagase's arsenal can damage or weaken them. Pulling out their Banshi will instantly destroy them, but this is a nearly impossible feat to achieve. According to Nui Harime, the Goku Uniforms have 'weak stitching' and are, in her eyes, 'crude', implying that they are nothing compared to her work. Goku Uniforms can also be worn out due to excessive use and will deform and disintegrate. Sanageyama demonstrated this during his battle against COVERS, where his uniform was destroyed due to overuse.

During a few episodes, Ryūko Matoi fought uniforms powered up by pieces of her own Kamui. These uniforms displayed increased power in terms of the abilities used by each selected student.

One-Star (つ, Hitotsuboshi?) uniforms are the most common variety of Goku Uniform, comprised of 10% Life Fiber. The male version is a light gray gakuran uniform with a single large four-pointed star symbol emblazoned on the center of the jacket, and a smaller white star on its collar; and the female version is a white one-piece sailor uniform with blue scarfs, collars and highlights and a small black star on the front of the collar.

They were later upgraded by Shirō Iori and the sewing club using data from the Elite Four's battles with Ryūko Matoi in preparation for the Tri-City Schools Raid Trip. The upgraded Goku Uniform took the form of colored tracksuits with white highlights, the school label on the left breast and with the kanji '襲' (Raid) printed in red on the back. The Goku Uniforms are colored according to the division the students report to: green for the athletic clubs, pink for the non-athletic clubs, yellow for the disciplinary committee and blue for the information and strategy team.

After the raid trip, the uniforms were once again upgraded, with the tracksuits being replaced by the original gakuran and sailor uniforms, which were recolored white with gold highlights and the smaller collar star was changed to gold as well. Interestingly, this new color scheme makes it appear that the uniforms were designed in replication of Junketsu's own.

The Goku Uniforms were later recreated and further upgraded by Shirō Iori in preparation for the final battle against Ragyō. Their white color was changed to black and the star emblazoned on the front was changed to white, though the gold highlights were retained.

Two-Star (つ, Futatsuboshi?) uniforms are made of 20% Life Fiber and are exclusively given to club presidents (though not every club president gets one). Their appearance and application varies greatly, with the main distinction of these uniforms being the reddish lining over many surfaces, sometimes over some parts of the uniform, and always over the uniform's stars and manifested weaponry. 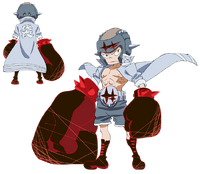 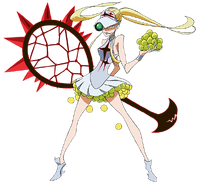 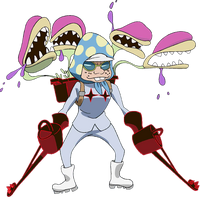 Three-Star (つ, Mitsuboshi?) uniforms are the highest-ranking Goku Uniform, made from 30% Life Fiber. The Three-Star Uniforms are worn exclusively by the Student Council's Elite Four and Shirō Iori. Each uniform's design and abilities are uniquely attributed to its wearer's default capabilities.

When worn, they make their users completely immune to attacks from One-Star and Two-Star uniforms. They are also able to transform in a similar manner to Kamuis and grant the users overwhelming and unique powers.

They were initially of a bluish-white and silver color scheme, though they were later upgraded by Shirō Iori and the sewing club using data from the Elite Four's battles with Ryūko Matoi in preparation for the Tri-City Schools Raid Trip and recolored pure white with gold highlights.

The Goku Uniforms were later recreated and further upgraded by Shirō Iori in preparation for the final battle against Ragyō. Their white color was changed to black and the stars emblazoned on the front are changed to white, though the gold highlights were retained.

Five-Star (つ, Itsutsuboshi?) uniforms have been created at least once for testing purposes by the Sewing Club. These uniforms, composed of 50% Life Fiber, have been shown in at least one occasion to grant incredible physical strength and muscle mass gain to regular students, though causing them to go berserk.