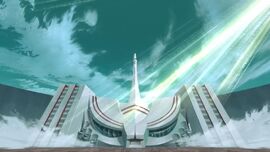 Honnōji Academy (, Honnōji Gakuen?) is a high school located atop Honnō City and the primary setting of Kill la Kill.

Honnōji Academy seemingly shared the same purpose and systems with regular school in Japan, but in actuality, it was built as the main testing ground of Life Fiber experiments (particularly Goku Uniform) commissioned by Ragyō Kiryūin herself, with Satsuki Kiryūin being charged to govern it along with the city.

Because of Satsuki's totalitarian rule over both the school and the city itself, living and studying at Honnōji Academy are best described as an exercise in survival at its extreme, with its students (particularly No-Star ones) finding themselves oppressed by iron-fist disciplinarians and abusive, if not outright excessively strict club presidents. Power struggle seemed to be a recurring occurrence as promotion rewards the students better, if not outright luxurious life standards and even control over the school. Those who disobeyed the rules would be severely punished, though death sentence occurs once the offender genuinely pose a threat to the school's well-being such as attempted theft of one of Goku Uniforms.

Even so, it's later revealed that Satsuki has a more noble motive in running the school: Whereas Ragyō only used it to ensure the Primordial Life Fiber's success in assimilating both humanity and Earth, Satsuki turned the school into a boot camp to amass enough army to combat Revocs Corporation and stop their insidious plan, all while weeding out the weak to ensure the success of that goal. While it appeared that Satsuki perceived Ryūko Matoi and her Kamui Senketsu as an obstacle between her forces and their goals, she deliberately turned the entire school against Ryūko to see the flaws in their Goku Uniforms. Unfortunately, her connection with her mother Ragyō, coupled with her extreme methods, put her at odds with Nudist Beach despite both the school and resistance group shared a common goal. It is only after Satsuki unveiled her true agenda and failed attempt in overthrowing Revocs with her own methods that alliance between both groups eventually possible.

In the episode 24 end credits, Honnō City (along with Honnōji Academy) is later seen in the bottom of Tokyo Bay.

Board of Directors Chair:

The Honnōji Academy Final Defense Apparatus (裁繍紡衛機関, Saishū Bōei Kikan?), also known as Honnōji Academy's Defcon System, is the final defense against Life Fibers. It was intended for use against the Original Life Fiber but was not used due to Ragyō having hijacked the entire school. The main Academy building serves as the body/head of the machine, and it moves via multiple attached segmented arms tipped with giant hands, which are normally the wall surrounding the academy.

The Defense System attacks by swatting at enemies with its huge arms and hands or grabbing nearby massive objects for use as improvised weapons. Its force are powerful enough to create massive crevices in the ground. It also boasts an impressive array of guns, which seem to attack any target that comes close to the Defense System. The System is apparently powered primarily via Life Fibers and requires at least one human with sufficient potential to serve as its power generator.

In episode 25, the System was hijacked by Rei Hōōmaru, who used Satsuki and Mako to power it and tried to seek revenge for Ragyō and Nui's death. However, the giant machine was destroyed by Ryūko and her Scissor Blades in its "Final Graduation Mode."

Honnōji Academy during the night before The Great Culture and Sport Festival.