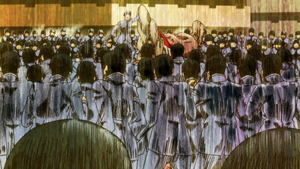 The Honnōji Academy First Naturals Election (第一回本能寺学園壊惨総戦挙, Dai Ikkai Honnōji Gakuen Kaisan Sōsenkyo?) was an event established by Satsuki Kiryūin in order to select the strongest amongst the academy's students.

All of the students in the academy were to have an all-out fight without restrictions amongst themselves for a period of seven days. During this period, a protective Life Fiber barrier was put up around Satsuki's chamber, foiling Ryūko Matoi's plans to attack her while the rest of the students were busy. Notably, Mako Mankanshoku does not participate in the Elections, choosing instead to take a week off. 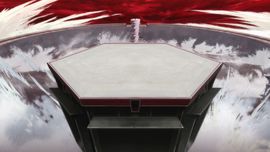 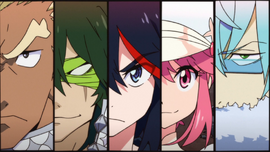 After this seven day period, the surviving students were to participate in the Sudden Death Runoff Election (決戦闘兵, Kessen Tōhyō?). Depending on their results, Satsuki would give them new Three-Star Goku Uniforms.

During Satsuki's speech, five pillars were erected in the schoolyard, and the ones who managed to make it to the top would be considered front-runner candidates. Although many students attempted to scale the pillars, the only ones who made it to the top were Ryūko, Ira Gamagōri, Hōka Inumuta, Nonon Jakuzure and Uzu Sanageyama. The latter four then proposed a new rule: each will face Ryūko in single combat. Satsuki agreed and added one more condition: if Ryūko managed to defeat the Elite Four, she would tell her the details involving Isshin Matoi's death.

Agreeing to these terms, Ryūko engaged and defeated Gamagōri, Inumuta (who forfeited before Ryuko could destroy his uniform), and Nonon, manifesting several new forms of Senketsu during each battle. Before she could battle Uzu Sanageyama, however, Nui Harime suddenly appeared in the arena, interrupting the event. The situation quickly spiralled out of control as Nui effortlessly defeated Sanageyama and battled Ryuko herself, goading the latter into entering a berserk state. However, Mako manages to literally slap Ryūko to her senses and bring her back to her normal self, saving her life from Satsuki, who was about to deal a finishing blow to her. Afterwards, Satsuki bans Nui from Honnōji Academy. This incident leaves Ryūko afraid of putting Senketsu on again, terrified that she will make her friend go through the terrible experience of going berserk all over again, though Nui manages to get her to put Senketsu back on eventually through an elaborate plan where she disguised herself as Shinjirō Nagita of the Newspaper Club.