The Scissor Blades (, Katatachi Basami?), also known as the Rending Scissors (ちりバサミ, Tachikiri Basami?) when combined, are a giant pair of scissors developed by Isshin Matoi specifically for severing Life Fibers. Divided into two weapons around the time of Dr. Matoi's death; one half going to his daughter Ryūko; and the other to his killer, Nui Harime. The scissor blades are made from hardened Life Fibers so this makes the Scissor Blades the only weapons (beside Satsuki Kiryūin's Bakuzan) that are capable of cutting through the Goku Uniforms and Kamui's (except for Ragyō Kiryūin's Shinra-Kōketsu, which is also made of hardened Life Fibers).

The Scissor Blades, along with Honnō City, sank into Tokyo bay in episode 25.

Ryūko owns the red half of the Scissor Blade. The crescent-shaped hilt can extend into a longer two handed sword, known as Decapitation Mode. Ryūko's signature finishing move is Fiber Lost (, Sen'i Sōshitsu?), a long-range forward thrust that completely destroys a Goku Uniform, allowing her to absorb it’s Life Fibers.

The red Scissor Blade also displays the ability to change its size, going from a weapon that is nearly as tall as Ryūko to a trinket barely any larger than a normal set of scissors. Ryūko usually keeps the blade in its smaller form when not in a combat situation, but also owns a metal guitar case to carry her weapon around.

The second half of the Scissor Blade spends most of the series in Nui's possession. Unlike Ryūko's half, it has a circular handle and a slightly more angular tip, making it slightly shorter than its counterpart. It can reconfigure into a stronger form that adds a curved scythe blade to both ends. It was eventually recovered by Ryūko in episode 22 during the fight against Nui, officially completing the former's weapon set.

This half of the Scissor Blade appears capable of changing color. It is shown to be red during Isshin's murder, purple when in Nui's possession, and red once again when Ryūko retrieves it.

When the Scissor Blades are used together, they are able to sever Life Fibers as well as prevent their regeneration, as shown by Nui's loss of her eye and arms (done by Isshin/Sōichirō and Ryūko respectively). Even though the Rending Scissors need to be used together to activate this effect, they do not need to be combined together to use this effect, meaning that it can have the same effect even when it is divided into two halves.

In episode 23, both the Scissor Blades go into "Decapitation Mode", implying that they have all the abilities of the separate blades (including a dual scythe form and the ability to shrink to the size of normal scissors). 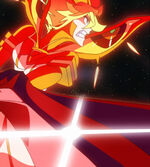 In episode 24, Ryūko finally reforms the original Rending Scissors after transforming Senketsu into Senketsu Kisaragi. The Scissor Blades were bolted together by a screw that appeared from thin air. In this form, they retain their ability to extend their blades, forming a pincer-like weapon called "Dual Decapitation Mode." However, due to Shinra-Koketsu "Absolute Submission", the weapon cannot damage it because it prevented any Life Fibers, including any weapon made of it, from damaging it. When Ragyō hit Ryūko with her final blow, the Rending Scissors are seen drifting towards space.

In episode 25, the Rending Scissor returned to Earth during Ryūko's near defeat. As it caught up to Ryūko during her fall, she grabbed on to it and used it to slow her descent and then proceeded to run up a wall. During her battle against the Honnōji Academy Final Defense Apparatus, she detached the Scissor Blades and then increased both scissors to a monstrous size, the left scissor referred to as Farewell Address Mode, right scissor as the Student Response Mode, or both scissors as Scissor Blades Alumni Mode, where, along with the remains of the S.S. Naked Sun, it destroyed the Honnōji Academy Final Defense Apparatus.

As the destroyed Honnō City sank into Tokyo Bay, both Scissors can be seen sinking along with it.

Rending Scissor in the second opening

Ryūko using her Scissor Blade as a tennis racket

Ryūko's blade reverted into a smaller size for easy carrying

The Purple Scissor Blade changing back to red

The Scissors Blades sinking along with Honnō City