The Great Culture and Sport Festival 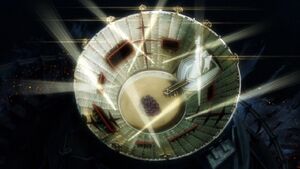 The Great Culture and Sport Festival (大文化体育祭, Dai Bunka Tai Ikusai?), also known as the Cultural and Sports Grand Festival, is a celebration organized in Honnōji Academy after the students return from the Tri-City Schools Raid Trip.

The school was rebuilt into a huge stadium, which was named Ragyō Stadium. All inhabitants of Honnō City were given a special formal suit to set up a welcome ceremony for the Board of Directors Chair and CEO of Revocs Corporation, Ragyō Kiryūin. Every citizen has an obligation to participate in the ceremony, any absence being severely punished.

When the VIPs, Ragyō Kiryūin, her assistant, Rei Hōōmaru, and the Grand Couturier, Nui Harime, entered the stadium, it came to light that the ceremony was in actuality set up as a test for a large scale COVERS invasion. The suits given to the people of Honnō City had Life Fibers in them, and when Ragyō began the Festival, the residents became trapped in cocoon-shaped Life Fibers, which were later absorbed by COVERS. During the people's entrapment by their costumes, Ryūko Matoi with Aikurō Mikisugi and Tsumugu Kinagase enter the arena. Whilst Ragyō was speaking to Ryūko, Satsuki backstabs her with the Bakuzan and hurls her into a statue bearing the school insignia, announcing her rebellion. She revealed that Honnōji Academy and it's students were, all along, a force created to fight against Ragyō and the Life Fibers.

The people are freed, the Elite Four battle against Nui, and Satsuki tells Ragyō that the whole truth about COVERS and Life Fibers were told to her by her father. When Satsuki lunges for the final blow, Rei comes in with a defense for Ragyō, which Satsuki breaks with just a single blow. This, however, gives time for Ragyō to release Life Fiber threads to control the minds of the academy students, including Ryūko. Satsuki is then attacked by a mind-controlled Ryūko but Ryūko manages to break free from the power of Ragyō, and then moves to attack Ragyō but is suddenly interrupted. Above in the sky, there were hundreds of COVERS. Ragyō then says that her body had fused with Life Fibers and can't be killed. Satsuki then battles Ragyō but loses and is stripped out of Junketsu, which Ragyō then dons for herself. She then attacks Ryūko and pulls out her heart, revealing that Ryūko is also infused with Life Fibers. Ragyō then reveals that Ryūko is her daughter.

The COVERS proceeded to capture people and absorb their bodies. Ryūko cuts the hand of Ragyō that was holding her heart, to which the heart slips back inside Ryūko and Ragyō attaches her dismembered hand. Ryūko then proceeds to attack Ragyō but is overwhelmed by both her and Nui. The battle is interrupted by a then-conscious Satsuki, whose last plan was to press a button which causes the explosion of the entire academy.